The Historic and Classic 2400 Motel

Where Vintage cars come to play

The 2400 Motel speaks to car culture – the love affair with the automobile that swept North America during much of the twentieth century. Car culture was responsible for the 2400 Motel being built in 1946, and car culture accounts for its survival.

The 2400 Motel testifies to the impact of the automobile on Vancouver and, more specifically, on the artery of Kingsway on which it is located. Initially the principal route into Vancouver, Kingsway displayed in abundance the three attributes of car culture – vehicle facilities, food, and accommodation.

The 2400 Motel is a perfect place to gather with other vintage car enthusiast, and is a place where you can park your car right outside your door.

To read a short history of the 2400 Motel as told by author Eve Lazarus, click here https://evelazarus.com/a-short-history-of-the-2400-motel/

The route we know as Kingsway has a long history. The Royal Engineers, who were sent from England to keep order during the gold rush beginning in 1858, feared invasion by the expansionist United States. So they laid out a trail running some 13 miles (20 kilometres) from New Westminster, the capital of the then British colony of British Columbia, northwest to Burrard Inlet. The route most likely followed a pre-contact Aboriginal trail. 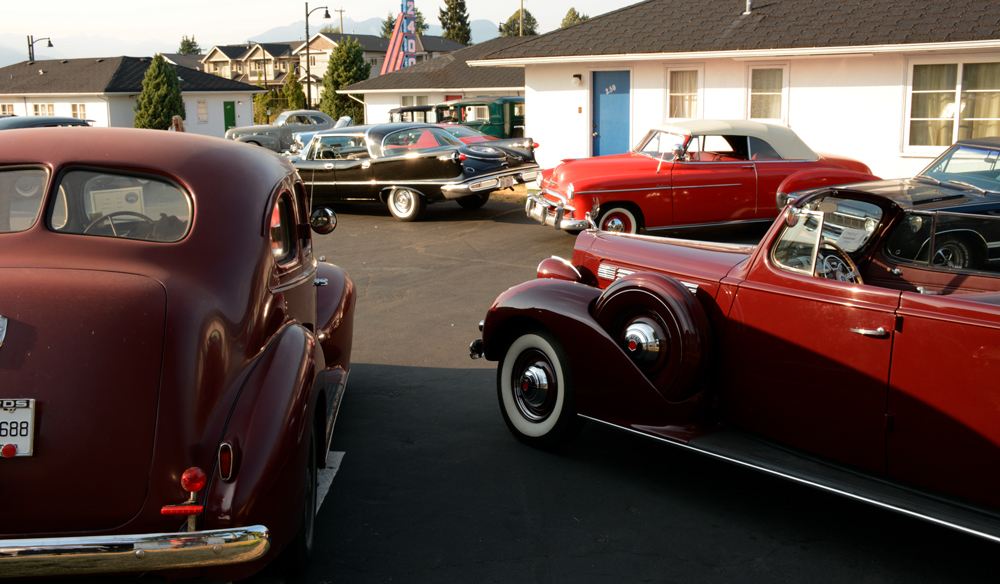 British Columbia survived to become a Canadian province in 1871. Westminster Road, as it was then known, expanded into a wagon road following the creation of Vancouver in 1886 as the terminus of the new transcontinental railway. From 1891 an interurban rail line paralleled Westminster Road a few blocks to the north (roughly today’s SkyTrain route). A streetcar line was laid out along Westminster Road from Broadway or 9th Avenue to Victoria Drive and 28th Avenue in 1909. The line was extended to Joyce Road, about 40th Avenue, in 1912. 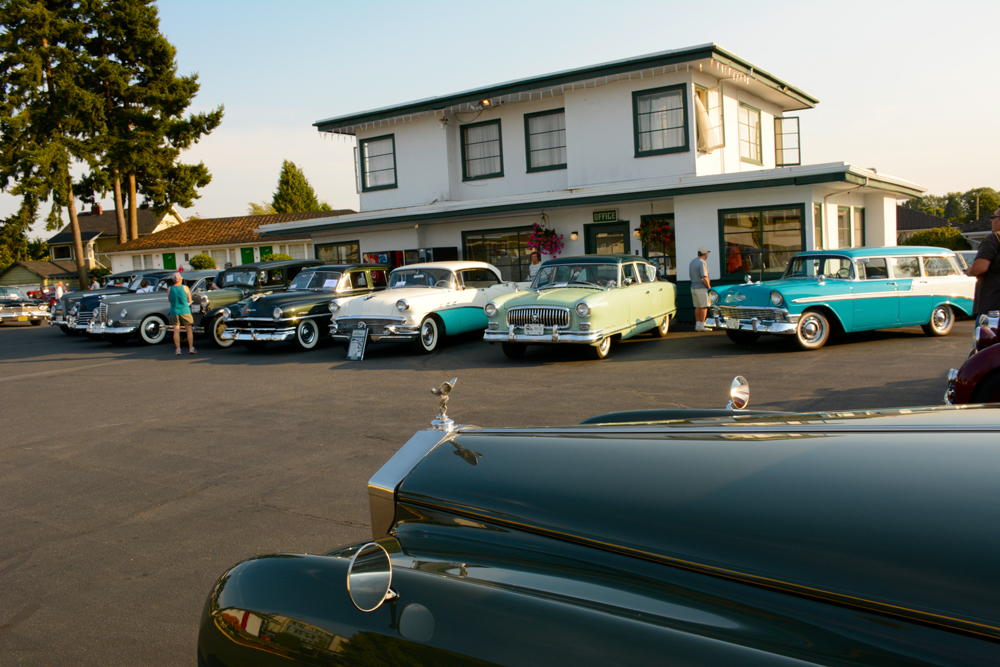 Means of transportation and settlement went hand in hand. The decade and a half prior to the First World War was economically buoyant, and men, women, and families from Britain, Europe, and elsewhere in Canada flocked to British Columbia in large numbers. By 1911 the population of Vancouver, then extending south only to 16th Avenue, surpassed 100,000. The surrounding area east to Burnaby, south to New Westminster and Richmond, and across Burrard Inlet to North Vancouver contained another 50,000. Newcomers, especially of modest background, were attracted to areas along Kingsway near to interurban and streetcar stops. The neighbourhoods we now know as Mount Pleasant, Kensington-Cedar Cottage, and Renfrew-Collingwood acquired shops and schools.

Kingsway remade. The car transformed Westminster Road. The automobile was one of the great inventions of the twentieth century, but there were drawbacks. Cars demanded smoother, harder surfaces than did horses. The early vehicles were in constant need of maintenance and could not be depended on to go long distances. It was as roads were improved and vehicles became more reliable that automobile ownership took off across North America. Existing routes were transformed as enterprising men and women scurried to provide essential services.

Westminster Road became the auto route heading south once the Fraser River was bridged at New Westminster in 1904. Nine years later Westminster Road was widened and paved with asphalt. Vancouver City Council celebrated by changing the name to Kingsway after a London, England, street. On the improved route’s opening in October 1913, some 600 cars paraded four abreast along Kingsway’s pockets of settlement amidst farms and empty lots to a celebration at Central Park in Burnaby. 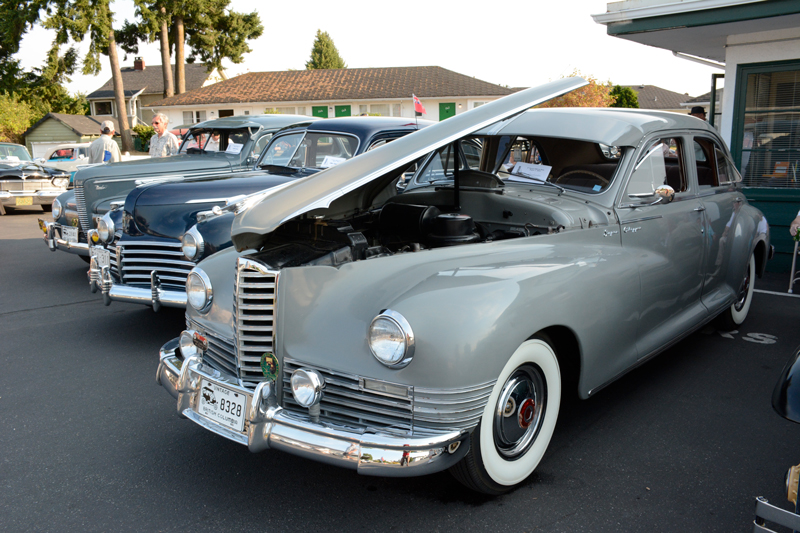 The booming 1920s made it possible for more and more families to afford an automobile and thereby holiday trips no longer dependent on public transportation. Together with gas stations, garages, and cafes, Kingsway acquired its first auto camps. This early form of overnight accommodation consisted of places to park, toilets, and possibly tents or rough cabins. According to city directories Kingsway had two auto camps in 1925, half a dozen by 1930. Four of the six were combined with a service station, two of the four also with a grocery store or café. 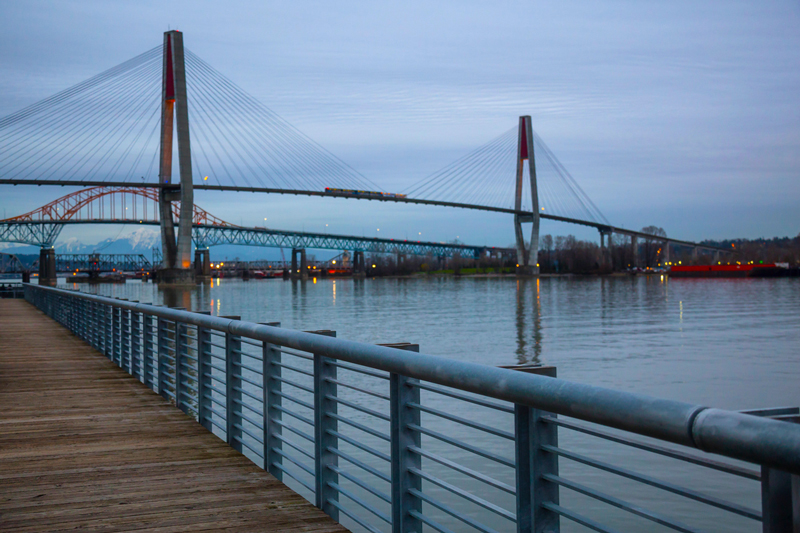 Kingsway kept growing in importance. The Pattullo Bridge crossing the Fraser River at New Westminster was completed in 1937. From there the King George Highway ran south to the international border at Blaine, Washington. Kingsway became the northernmost section of a road system linking Vancouver down the American coast to Mexico by what became known as the Pacific Highway.

Determination grew to widen Kingsway to three lanes in each direction. No sooner had the cost of the 1913 improvements been repaid in 1925, the talk began. Some work was completed during the early 1930s, but it took until the end of the Second World War for the project to get underway and until 1950 for it to be completed. By then Kingsway was the main arterial highway not only heading south but also east along the new Trans-Canada Highway.

Kingsway triumphant. Kingsway – or the ‘Pacific Highway’ as it was increasingly called – seemed to have it all. No facility better exemplifies the heady optimism than the 2400 Motel, constructed in 1946 just north of 33rd Avenue between Nanaimo and Slocan. Its original name of 2400 Court signaled the growing sophistication of accommodations. Auto camps were giving way to auto courts, which offered a common open space, or ‘court,’ fronting furnished bungalows with kitchenettes. A large neon sign greeted travelers as they crested the hill to 2400 and viewed Vancouver in the distance. While typical of auto courts across North America, the sign also had a distinctly Vancouver flare, for the city reputedly boasted more neon than anywhere else in the world except for Shanghai, China. 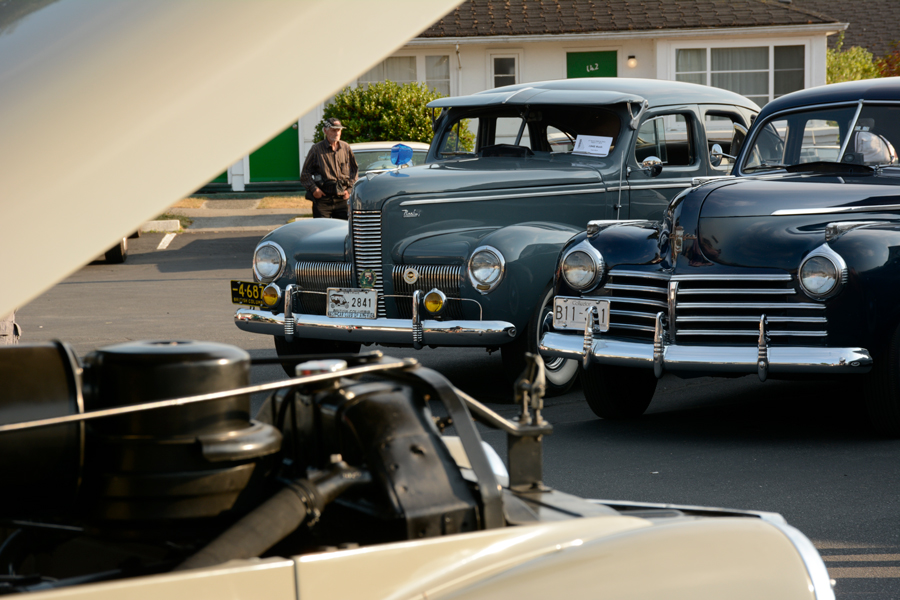 Car culture was at its height, and a future filled with tourists appeared to be assured. The buoyant postwar economy permitted more and more families not only to own cars but to afford the leisure they facilitated. The three essentials of car culture proliferated along Kingsway, which became a classic strip mall, as such routes were termed. Gas stations and garages had long been a prominent Kingsway feature – some two dozen in the mid-1920s – and they continued to be so. Roadside food was becoming popular, and by 1960 Kingsway sported a good half dozen drive-ins, including Wally’s Burgers at 2703 Kingsway and the Rickshaw at 5640 Kingsway specializing in Chinese food. 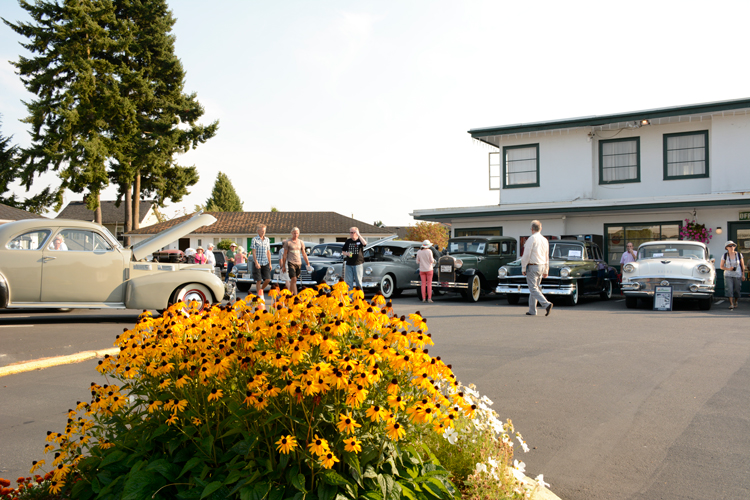 By then auto courts were being upstaged by motels, a word combining motor with the more luxurious sounding hotel and usually signaling single structures containing multiple units. Kingsway’s remaining dozen ‘auto courts’ were by 1960 challenged by another dozen ‘motels.’ In accord with the shift, the 2400 Court changed its name in the early 1960s, according to city directories, to the 2400 Court Motel. As for the neon sign, the word ‘Motel’ was simply tacked on the bottom.
Kingsway bypassed. The future so optimistically envisioned for Kingsway was not to be. Across North America, the first generation of roads was mostly bypassed by extensive highway construction beginning in the 1950s. The so-called ‘Pacific Highway’ moved west with the opening of the Granville and Oak Street bridges across the north arm of the Fraser River in 1954 and 1957, and then the George Massey Tunnel under the river’s south arm in 1959. The opening of the Knight Street Bridge across the north arm of the Fraser in 1974 pulled even more traffic away from Kingsway. And strip malls gave way to shopping centres, a phenomenon initiated by Oakridge opening in the late 1950s between the two new routes south out of Vancouver.

Over time the 2400 Court Motel’s fortunes dimmed alongside those of Kingsway. Neon lost its appeal, so that the 2400’s sign no longer captured the attention it once had. Design moved away from individual units (auto courts) to single-roofed multiple units (motels) and then to stacked multi-unit structures (motor hotels). Independent mom-and-pop operations, such as the 2400 Motel was up to 1989 when purchased by the City of Vancouver, gave way to larger and more economically-run motels and motor hotels whose corporate ownership or franchising promised dependable uniformity between locations. Instead of kitchenettes, newer structures sported coffee shops; instead of grass courtyards, swimming pools. Typical was the two-story Eldorado Motel, later Motor Hotel, opening in about 1960 up the street from the 2400 at 2330 Kingsway. 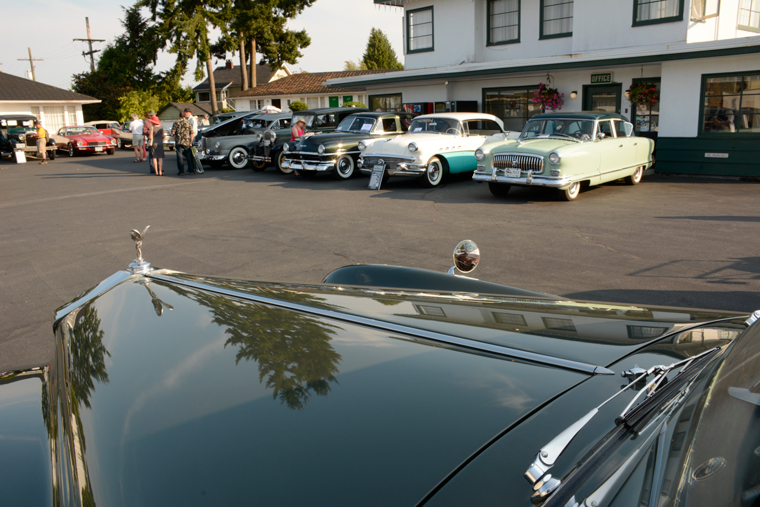 The growth of immigration into Canada from the 1970s on further changed Kingsway. The area appealed to newcomers from Vietnam, Korea, and China, many of modest backgrounds not unlike their predecessors several generations earlier. Indicative of this shift, Wally’s Burgers was purchased early in the present century by a recent immigrant from Korea. The accumulation of changes caused structures like the 2400 Motel not to be updated or replaced as they would have been if located in some other parts of Vancouver, but rather to continue in operation relatively unchanged into the early twenty-first century.

Because of its relatively intact status, the 2400 Motel is an important example of residential site planning and building practice for the period immediately following WWII: the scale and spacious distribution of the repeated bungalow duplexes set in the expansive lawn landscape are typical of housing schemes and suburban housing of this period, suiting this more residential stretch of Kingsway. The bungalow form, details and materials are all typical of post-War houses and public housing, including war workers’ housing and veterans’ housing. The formality of the site planning at the 2400 Motel, including the Kingsway vehicular-only entrance, set on an axis with the administration office, the formal flower beds and clipped shrubbery, and the iconic signage along Kingsway, are together a memorable commercial interpretation of Modernist car-oriented suburban site planning and design. 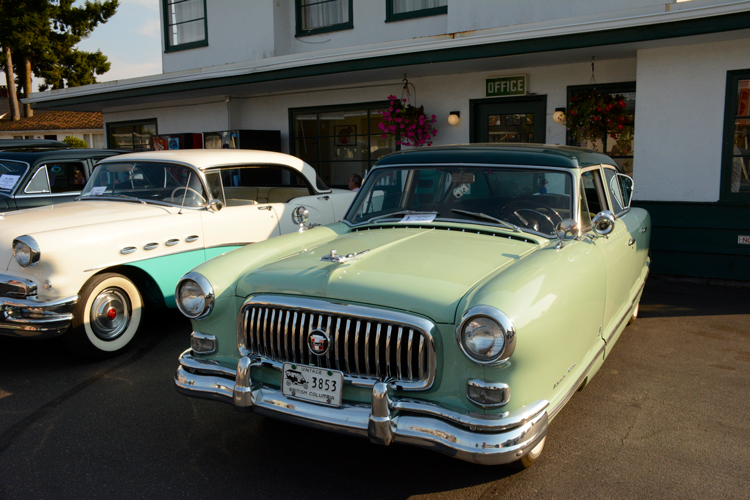 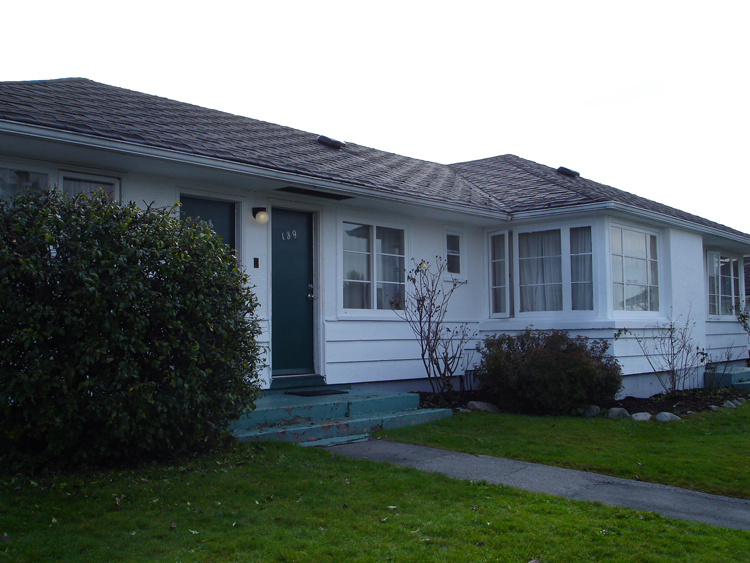 The 2400 Motel’s geographical prominence at the point along Kingsway where a broad view of Vancouver is first seen, the Motel’s very longevity, and its singular appearance of being from another time, make the 2400 Motel one of the most recognized grouping of buildings in the city, giving the site a city-wide and even regional importance in the cultural landscape. Its neon sign, a carry-over from Vancouver’s days as one of the greatest centres of neon signage in the world, cements the iconic stature of the site.
The 2400 Motel is a rare place of shared memories. Not only did the 2400 function as a home-away from home for many travelers, with loyal visitors repeatedly returning to stay over many decades, but it has entered Vancouverites’ collective imagination as a seemingly immutable part of the city – a whole, miniature world from an earlier simpler time.